As one grows up, there are actors and actresses that you expect to pass away during your lifetime.  Many, when they do pass, tend to evoke the response of “wow, they lasted that long…”  Then there are those entertainers whom you expect to be there forever.  For me, Robin Williams is one of those that falls in the latter category.  Since hearing the news, I knew that I would have to write this, and that I would need to do it while the feelings were fresh.  I just wasn’t sure how I wanted to approach it.  So I spent some time away from the computer and watched The Birdcage.  After finishing it, I felt ready to write.

The only way to properly do this is to approach it as if I were talking about my latest adventures at the movies.  Instead, as the soundtrack to Hook plays, I am going to tell you about how I grew up with the boy who truly never grew up. 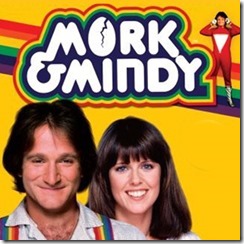 In the late 70s, I was but a wee lad.  Watching TV with the parents was fun as I got my weekly diet of Happy Days.  In 1978, a strange episode aired that looked to be a weird way for Happy Days to try to capture some of the interest people were having in aliens after the mega-success of Star Wars.  An alien named Mork showed up and my TV watching changed.  Mom was never big into science fiction, so mainly Dad and I would watch Mork & Mindy each week.  Mom would catch snippets every once in a while.  We moved out to Cheyenne, WY, in 1979 – a place that was as alien to us as anything that would pop out of a spaceship.  While living there, we happened to visit Boulder, CO, where the show was set.  We soon moved back east, but I kept watching. 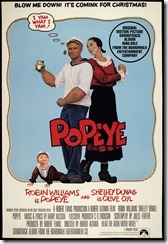 In 1980, my first exposure to the idea of making animation live-action happened when I heard they wanted to release a live-action Popeye, with Mork in the title role (I was 9 and only knew of him as Mork).  I wanted to see it, but my parents were not interested due to hearing bad things about it (i.e. it was a bad movie).  So I never got to see it on the big screen, but I have seen it on video since.  While it is not great, it is ambitious, and the casting of Robin Williams and Shelly Duval was spot on.  I think it didn’t do well because it wasn’t Mork being Mork or a frenetic Robin Williams doing his stand-up.  In what would become a theme for him in the 80s, people were not ready to accept Robin Williams the actor.

While Williams started exploring his acting range, the results were mixed in audience reception.  Even though he was the main character in The World According To Garp, all of the news seemed to circulate about how John Lithgow played a transsexual.  Moscow On 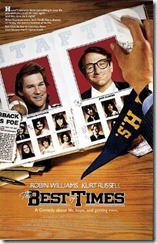 The Hudson received good comments from critics for Williams’s acting, but bombed at the box office due to how it was marketed versus what unfolded on the screen.  At this point, Mork & Mindy had been off the air for two years and newer stand-ups like Eddie Murphy had stolen the comedy spotlight.  Williams didn’t let it dissuade him from taking interesting roles, but he did make sure there was room to work his comedic skills.  In 1986, he paired up with Kurt Russell in The Best Of Times.  By this point, I was 16 and would go see a broader range of movies.  Mom has always like Kurt Russell and asked me to go see this with her.  The movie is about two men replaying the final big high school football game in their career, and playing the “what if?” game of what life would have been like if they had won the game.  The movie also delved into some relationship stuff without getting too heavy.  While not a great movie, it wasn’t bad.  That same year, Robin Williams showed his humanitarian side by teaming up with Whoopi Goldberg and Billy Crystal to headline Comic Relief, a charity that focused on the homeless.

Who knew that all of this would be the quiet before the storm…? 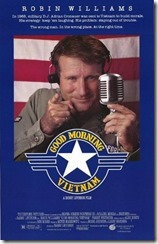 In 1987, audiences were finally mature enough to appreciate the range of Williams’s acting with Good Morning Vietnam.  Based on the life of Adrian Cronauer, Williams played an Armed Forces DJ that was supposed to help keep up morale.  The story evolves as he becomes known to the locals, and is despised as a “rebel” by his superior officers.  Many of the “broadcasts” in the movie are improvised bits from Williams.  While there were comedic moments, Disney was taking a big risk with this film.  Released under the more-adult Touchstone banner, a lot of the movie is focused on the character development of Williams and the complexities surrounding Vietnam.  Having been a baby when Vietnam was happening, it was difficult to put the movie in a proper frame outside of what I knew from history books.  In addition to creating one of the most quotable lines over the past 30 years in movies, Williams picked up what would be his first of 4 Oscar nominations, and kick off a 5 year-run that firmly established him as an actor for all genres.  This was also the start of a long partnership with Disney.  In 1989, Robin Williams provided the onscreen talent for the Disney/MGM Studios Animation tour when the park first opened.  This remained in place for about 12-15 years.

1989 brought us another iconic role from Williams in the form of Dead Poets Society.  Now, as much as it pains me to say this, I have not seen this movie.  It came out while I was recovering from a severe accident that sidelined me from seeing movies over a 4-5 month time span.  It garnered another Best Actor nomination, but the Academy was still reluctant to honor his work.  Upon hearing of his passing today, Erik Childress offered this video clip as to how the Academy should remember him during next year’s telecast:

This was followed by another dramatic movie, Awakenings.  While Robert De Niro got the nomination for Best Actor, many thought that Robin Williams should have been nominated for his work as the doctor.  At this point, it is now 1991, which saw the release of two vastly different, but important entries to Williams’s filmography.  The Fisher King continued the dramatic path that Williams had been on and earned him yet another Oscar nomination. 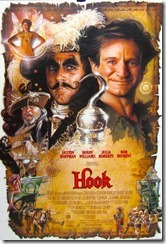 Then Christmas 1991 arrived with Steven Spielberg’s ambitious live-action tale of Peter Pan titled Hook.  While some of my friends get annoyed with my waxing poetic about the soundtrack for this movie, what they haven’t heard a lot about is how much I truly enjoyed this movie.  I liked the idea of seeing what happened if Peter Pan grew up.  The movie also featured a cast that had star-power at every level.  Sadly, too many audiences let the production trouble news affect how they saw the movie.  Regardless, this movie shows us the struggle that Robin Williams was having: people wanted him to be the boy who never grew up, but he had more serious responsibilities.  This movie works because it is his soul.

1992 saw a continuation of the Disney partnership in two ways.  Disney was able to get Williams to become the voice of a robot for the revamp of their 360-Circlevision attraction in the Magic Kingdom.  While the video is long, check out his performance, and notice how the Imagineers even made the robot look like him.  Thanks goes out to WDW News Today for providing this video:

Yet this pales in comparison to what was unleashed at Christmas.  Disney r

eleased Aladdin and continued its streak of blockbuster animation.  Those who had missed out on the 70s and 80s when Robin Williams was at his zaniest, got a full taste with this movie.  Prior to this, Disney had steered clear of anything that would “put a date” on their movie.  In casting Williams as the Genie, Disney had to allow some pop culture to seep in in order to capture the full performance.

The final movie in this improbable 5-6 year run was Mrs. Doubtfire.  Continuing the path of family-oriented movies that started with Hook, Williams plays a father that is divorced from his family.  He assumes the role of a housekeeper in order to stay close, and the typical hijinks ensue.  Sally Field and Pierce Brosnan help tell this tale, and it remains light-hearted enough to still be considered a comedy. 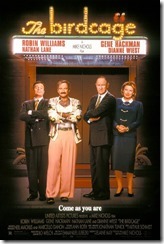 Sadly though, streaks are meant to be broken.  What followed seemed to be the story of his movie career: iconic hits with a lot of mediocre to bad movies in between.  Jumanji, while intriguing as a concept, suffered from poor story development.  Nine Months was more for Hugh Grant than Robin Williams.  1996 brought us another memorable movie, The Birdcage.  What made this interesting is that Robin Williams had to play the straight man to all of the wackiness around him, no pun intended.  Yet it is in the quiet moments that you see the true power of his talent as he wrestles with choices that parents go through.

1997 finally brought the role to Robin Williams that would validate his acting in Good Will Hunting.  For his turn as a psychologist, Williams was honored with the Best Supporting Actor Oscar.  While he never won when nominated as Best Actor, he won the only time nominated as a Supporting Actor.  The family-oriented pictures continued with his remake of the Absent-Minded Professor titled Flubber.

2002 saw another part of Williams – his dark side.  Insomnia and One Hour Photo both showed how he could be a truly terrifying villain if he wanted to be.  While I did not see One Hour Photo, I did see Insomnia and was blown away by his performance.  Sadly the only other movies I saw him in were the two Night At The Museum movies.  This is because I would hear bad things about the other movies right before going to see them.

Fittingly, my time with Robin Williams ends where it began: on television.  CBS aired The Crazy Ones in the 2013-2014 season.  While it never did well in the ratings, I watched it because I enjoyed seeing him on the small screen again.  He does have 4 movies in post-production that will come out.  Yet I can’t help but think selfishly of all of the unknown comedy we, the fans, will miss because he is gone.  The last time I felt this way was when Phil Hartman tragically passed.

While rumors swirl as to why he passed, I want to remember Robin Williams as he sought to bring joy to others.  The best way to close this out is with the music video for Bobby McFerrin’s Don’t Worry, Be Happy.  Not only is the message poignant tonight, it shows a young Robin Williams playing on camera…