From the very beginning, I have always talked about how the movies I saw as a kid shaped me and my interests today.  I am thankful that I grew up in an age where watching movies at home wasn’t easy to do.  I grew up reading interviews with Lucas and Spielberg where they cited inspirations being the old serials that they would watch at the local theater.  No matter how it was described, going to the movies for these directors and countless others like me was an event that was treasured, no matter how good or bad things were.

For me, the first science fiction movie I saw on the big screen was Star Wars.  Even with all of the normal things people point to, what captured me from the beginning was that this was a ride:  a rollicking ride through the universe with Luke, Han, and Chewy as our guides.  It was this fun I looked for in science-fiction movies then and now.  While my tastes may have matured over the years, sometimes I just want the Flash-Gordon, Han-Solo fly-by-the-seat-of-your-pants fun that can be one of these movies.  Sadly Hollywood is fixated that everything must be a space opera with great importance.

This does science fiction a disservice.

Why?  Think back to why many kids grew up reading Tom Swift and Jules Verne; watching Buck Rogers and Captain Kirk; and waiting forever to see Han Solo crack that cocky grin and blast his way out of trouble.  We thrilled to the excitement of their adventures and couldn’t wait for the next one.  Comics helped fuel this with superheroes that not only took care of Earth, but the whole universe.

While I am familiar with the Guardians of the Galaxy, I have never really read anything except the Infinity Gauntlet trade paperback that Amber grabbed for me as a thank-you for taking her to the 6-movie Marvel marathon when The Avengers came out.  So unlike some of the other Marvel and DC movies, I had no preconceived notions of what to expect over the past 2 years as production began on this project.  I also made it a point to not really read a whole lot about this movie, choosing to remain spoiler-free as much as possible.

That said, I still kept up with basic news: casting, director assignment, etc.  I was intrigued by two casting choices:  Chris Pratt as Peter Quill, and Bradley Cooper as Rocket.  I had not watched any of James Gunn’s work, but the general vibe was one similar to how people felt about Joss Whedon directing The Avengers:  it will; either be tremendously good or tremendously bad.  When the first trailer hit and I heard “Hooked on a Feeling” as part of it, I knew that this was not going to be a typical sci-fi/superhero movie.  This had the potential of being a great entry in the genre. 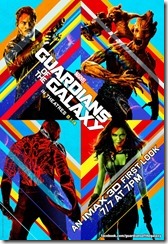 In early July, I got lucky enough to score a pass to a special IMAX preview of the movie.  In the 17-minute screener, I got to see one of the major scenes that highlighted what the movie would be:  a rollicking good time.  The 3-D looked amazing, and the casting was dead on.  As a bonus for going, everyone got a special poster to take home.  All I could think about on the way home was how good this movie was going to be when I saw it completed.  For something that I had minor interest in before, I was now rabid for more.  Yet I still avoided spoilers – I knew that to indulge now would ruin what could be a truly fun experience in the theater.

I did get to see it on the Thursday night before opening, but I had to settle for the AMC Dine-In theater.  I say settle because it is not outfitted as an ETX screen.  I chose the dine-in option due to not knowing when I was leaving work and the ability to reserve my seat.  AMC was running a promotion for Stubs members that gave them a free random pin with ticket purchase; I got Gamorra.  I settled into my seat, ordered dinner, and waited for things to unfold.

For once, I had not built this movie up too much in my head before seeing it.  There is a lot of good to enjoy, enough to offset any bad.  So what did I like:

So was there anything I did not like?  Some minor quibbles, but nothing that kills the enjoyment – here is what I noticed:

My Advice:  Pay full price and see it in 3-D IMAX; well worth the money.  I anticipate seeing this movie 1-3 more times in the theater.  It is on my top 10 list for the year, top 5 for Marvel movies, and one of the top in the genres of Science-fiction for me.  I anticipate enjoying this one for years. 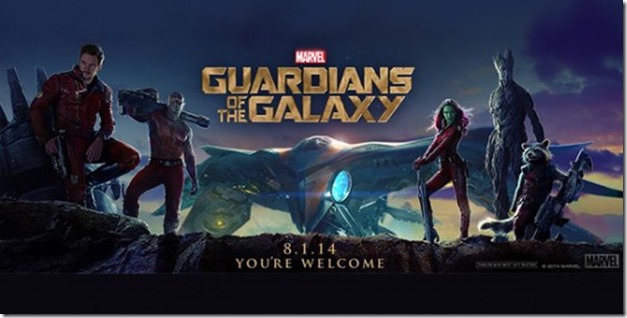