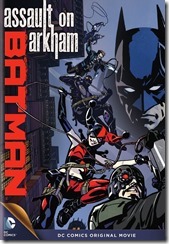 Over the past 6-7 years, Warner Brothers and DC have done a great job in making and releasing direct-to-video animated movies.  In most cases, they have done so well that fans often are left wondering why they can’t have the same success on the big screen.  Assault On Arkham is the latest entry in the animated DCU, and, much like its title, it packs a punch.

Assault is based on the Batman universe created for the Arkham Asylum/Arkham City video games.  It is also the first Batman animated movie to not be based on events already published since Batman: Gotham Knight.  While Batman is in the title and figures into the movie, it is really about the Suicide Squad.  For those not familiar with the Squad, it is a grouping of some of the more popular villains that can do some good every now and then.  The Squad gets its missions from Amanda Waller, only person not in prison that is not afraid of Batman.  For each mission, the objective is simple: get what Waller wants, or die trying.  That last option includes her remote-detonating bombs that have been implanted.  In this movie, the Squad is to infiltrate Arkham, recover something the Riddler has hidden, and then bring it back.  There is a subplot of Batman looking for a hidden nuclear bomb made by the Joker, as well as another subplot relating to Harley Quinn and her “sweet Puddin”.

Much like the video game, there is plenty of action.  Make no mistake: this movie is rated PG-13, and I feel it is a hard PG-13.  Unlike most DCU animated movies, the body count is high and the bloodshed is shown on-screen.  As I watched this, I couldn’t help but think about an episode of Kevin Smith’s podcast, “Fat Man on Batman”, where he was doing a “live” commentary of Batman Beyond: Return of the Joker with Paul Dini.  During that podcast, it was discussed how WB was reluctant to release the first version because it involved shooting someone on-screen.  Of course that was 14 years ago, and Warners has changed.  The other jarring thing that makes this a hard PG-13 is the partial nudity displayed by Harley and Killer Frost.  Now don’t get that excited – both were from the back, but Harley was more exposed and hers led into a sex scene.  While Frost’s reasons made sense, Harley’s scene felt gratuitous.

The voice work was ok.  Kevin Conroy was excellent as usual, as was the use of CCH Pounder in reprising her Justice League/JL Unlimited role of Amanda Waller.  John DiMaggio was wasted as King Shark, when had done so well as Joker in Under The Red Hood.  When you have the guy who got great reviews while being compared to Mark Hamill for the Joker, then YOU USE HIM AGAIN.  Instead they went with someone else that did ok.  The new person doing Harley was fairly decent, but felt like she was impersonating Tara Strong – if she reprises this role again, she should change it enough to make it unique from Tara.  That is what Tara did to differentiate herself from Arleen Sorkin.  All of the other vocal performances were serviceable, but none really stood out.

The Blu-Ray comes with the following features:

My Advice:  If you just want action/violence with a thin semblance of story wrapped in the guise of the Batman world, then have at it.  This is definitely not for kids under age 13 due to the violent deaths.  I just wish they had spent more time developing a better story that would have made us care as to why we are watching this.  While I have included the trailer below, notice that it acts like the violence will be about the same level as the other movies.